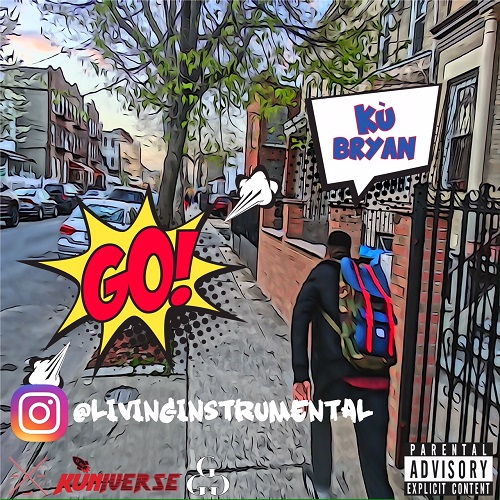 A while ago those in power felt that the music business would be better off if all artists imitated the sounds and appearances of the must popular artists of any given genre of music as the smartest way to find success in the industry…  Problem is the game changing mc they call KÙ Bryan obviously didn’t get the message.  Ushering in a musical style and brand that is totally original along with paying homage to his diverse background is the magic that is… KÙ Bryan. Born Trimane Bryan aka KÙ Bryan in Guyana, South America he enjoyed a rather affluent up bring as the son of Guyanese and Chinese parents who owned a highly successful Goldmine is what provided him a life of luxury as a young lad. However, at the tender of nine years the artist who’s performance initials stands for Kool Universe was force into a harsh reality when his parent’s moved to New York located in the United States. Forced not only to adapt to life in the USA a young Kool Universe had to learn also how to survive in arguably the most crime ridden part of all America east New York’s notorious boroughs of… Brooklyn. Known nationwide for drugs, gangs, prostitution, robberies and murder Brooklyn coupled with a privileged childhood back in Guyana would help shape KÙ Bryan into the all around artist’s that many highly respected, bloggers and music publication are touting as the next cant miss international superstar. A true student of Hip Hop is most evident in KÙ Bryan’s top musical influences that include Rap heavyweights such as Big Daddy Kane, Slick Ricky, Outkast, Juelz Santana, Kendrick Lamar and Nipsey Hussle. Unapologetic in his steadfast mission to raise the bar of music excellent is the badge of honor so proudly woren by a once in a generation caliber talent destined to be the new voice of Hip Hop… Kool Universe. With more than a jaw dropping 250 show performances and counting already tucked away under his young but well traveled belt the sky is truly the limit for KÙ Byran’s breakout EP entitled “GO” that was produced by hit making producer Krazy Figz. Featuring the smash hits “Something Nice”, “So Kool”, “Smoke” and “Takeoff”. Setting the stage for an epic career and even greater individual whose indelible mindset is as follows “We are all our own universes and with proper knowledge of self we can all live in a beautiful kool world” —

Writtten by the: THE Voice T.P. FRAZIER for celebritywritings.com 2018 all rights reserved