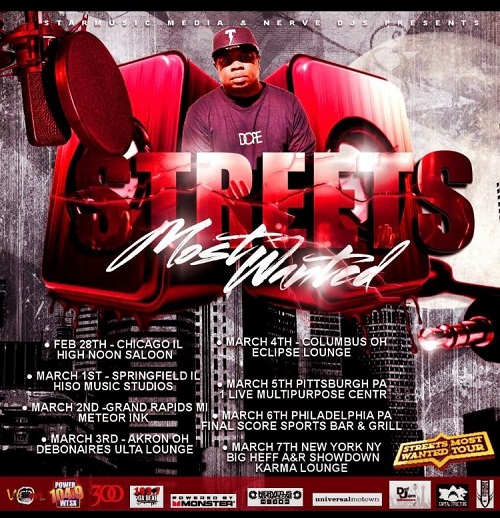 The Streets Most Wanted Tour kicks off its 2019 first quarter tour in Chicago, IL on Feb, 28. This installment of the tour will cover 8 cities in 8 days and will be headlined by Akee Fontane. Featured artists are Tecey Travolta and Stromile.

Akeem Coston , known by the world as Akee Fontane is a rapidly-emerging American hip-hop artist from Wilmington, Delaware who’s attracting attention for his deeply creative vibe and unique lyrical flows. His latest release, Big Dreams Small City (distributed by Pure Luxury Ent.), dropped February 7th, 2019 and was produced by Grammy-nominated Atlanta producer The Shoota. The new record is a fine introduction to Fontane’s world for new converts and will solidify his reputation and brand as one of the most upwardly-mobile performers on the modern rap scene.

In 2010 Quincy Taylor created the Big Heff Industry Tour, it’s a quarterly artist awareness tour that helps break new singles and artist. This allowed him to develop new markets for his clients with extensive retail promotion, tastemaker events, radio interviews, and concert performances that has allowed Quincy to have nonstop continuous growth for all of this businesses and clients. The tour has evolved into the Streets Most Wanted Tour. In 2011 Quincy was appointed as the Vice President of “Nerve DJs”, a midwest based DJ group specializing in radio, club, online promotions, and building relationships between artists, music, and DJs.

In 2014 Quincy “Big Heff ” Taylor joined the team with Def Jam Records as the Ohio Valley Region Rep. working on projects in the Midwest Region. In 2015 he created the Big Heff Radio Show which is now syndicated on 9 different stations and he created a partnership for the Midwest Connext TV Show a video countdown music program which highlights Midwest music.