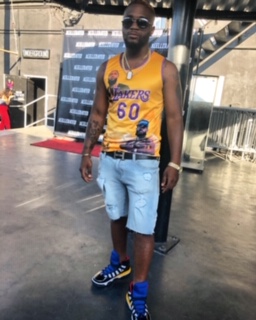 BRISTOL, PA – A lot of things changed for Winston Williams when one of his closest friends stabbed him in the eye.

Winston “Blitzo” Williams was born in Monrovia, Liberia and moved to the U.S. with his family when he was only 4 years old. They moved into the neighborhood projects just outside of Philadelphia and for the rest of his childhood, he grew up in the struggle. But his isn’t a story that others from the struggle have experienced. He discovered a gift for songwriting as early as age 7, and was already on the fast track to becoming a household name in the music industry by age 13. By age 19, he was hosting his own shows in New York and setting up major tours all over the U.S.

Things were perfect until he visited home and went by the studio to work with one of his friends on some new music. An argument broke out and before he knew it, Blitzo was doing whatever he could to save his own life. His friend was coming at him with a knife, first stabbing him in the eye and then in multiple other places around his body. He spent many days in the hospital and despite multiple surgeries, the doctors weren’t able to save his eye – but they did save his life.

The incident derailed his career for a bit, but after some recovery time, both physically and mentally, Blitzo is back and ready to pick back up where he left off. He’s starting that second lap of his career with a new single called “Big Blitzo” which is the first track off a new album by the same name. A new music video for the single just recently dropped, and he’s excited to be able to share this new music with the world.

“It’s basically me re-introducing myself to the industry and letting them know who I am,” he said of the song. “My story is really different. I had a real close friend try to take my life. He stabbed me and almost killed me, but I can’t give up. I gotta keep pushing. It’s a blessing to be alive and music has saved my life in more ways than one. It will continue to save my life. That’s what I want my music to do for other people. I want it to be inspirational. My story is going to inspire people. It’s definitely good music, 100 percent. But as I’ve grown as an artist, it has become all about longevity and keeping going and creating the next sound for the next generation.”

Blitzo points to the late Nipsy Hustle as his biggest inspiration in music and in life.

“What happened to him is tragic,” Blitzo said. “As an artist, he really taught me a lot of things. Growing up and dealing with people who try to scam you… and you just want to make it and go record and make some videos and chase your dreams. People try to take advantage of you and it’s hard. But he did it, and I saw that and it gave me faith. I need help but I can’t give up. He changed my life in that way and I cried when he passed. But he has taught me to just keep pushing. I know that my strength is undeniable and I’m just going to keep going at this point.”

Blitzo’s music is available across all streaming platforms. To listen to his music or to follow him on social media, please visit: