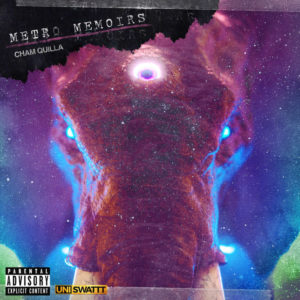 EASTON, PA – Cham Quilla is a recording artist and producer whose unique production and atmospheric sounds give listeners a taste of something new and fresh. His latest album, “Metro Memoirs,” is an exploration of life’s double meanings and deeper truths set against an ambient and spacey kind of vibe. Released under the Uniswatt LLC label, “Metro Memoirs” is the album that’s set to put Cham Quilla on the international map in big ways.

“It’s an album about growing up in the city and suburbs and my stories that come from living in that kind of area,” Cham said. “But it’s also an album that comes from a metrosexual man – a guy who likes to take care of himself and look good. Everything about this album has a double meaning, with stories that touch on both of those aspects of my life and my personality. A lot of these stories are personal stories, told in a dream-like, spacey kind of way.”

The debut single from the project is a song called “Déjà vu.” Cham refers to it as a “heartbreak type of song” that’s ultimately about getting in a new relationship with someone who constantly reminds you of the person you were in love with before.

“As much as you want to be involved and fully committed, the fear of the past relationship pulls you back from fully committing,” he said. “It’s definitely a song in the R&B lane, and shows people how I definitely have a different sound than anything else out there right now. I don’t try to copy what’s out there in the mainstream. I make my own beats and stick to my own lane. I try not to use too many industry sounds because I really like to use my own sounds and create new vibes.”

Cham Quilla said he first got into music a kid when his older brother bought a beat machine called the mv8000. When his brother got bored of using the machine, Cham started to use it and make beats. When he couldn’t find any artists to record on his beats, he started to record himself on top of his beats. He’s produced and written songs ever since, and pursued a passion in audio engineering when he left home and went to New York City to go to a music production school called IAR. This is his first full album to date. He said it’s a project that not only will showcase who he is as an artist, but also something that can help people get through hard times in their lives.

“Whatever someone is going through, if I can help even one person then I’ve done well,” he said. “I hope to return the favor, so to speak, to someone. Music helped me through hard times, and if my music can help others through hard times then I feel like I’ve done my job

To listen to Cham Quilla’s music, or to follow him on social media, please visit the following links: