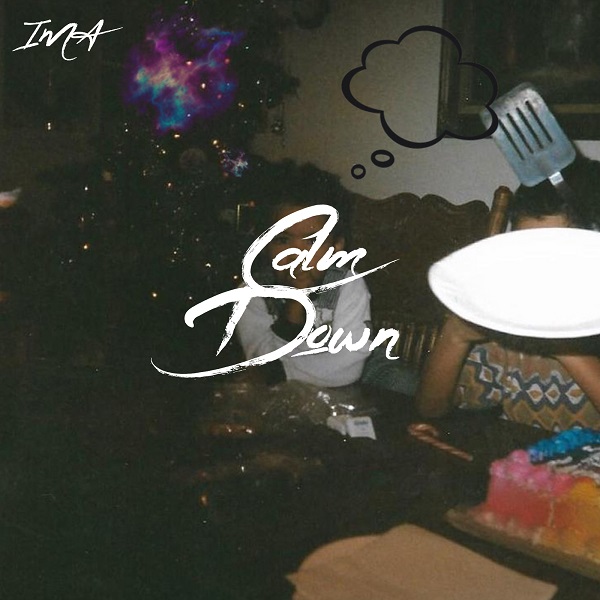 SEATTLE, WASHINGTON – Although Isaiah Malik Armstrong (known by his stage name “IMA”) started over nine years ago as a DJ for upcoming rappers, his new album, “Calm Down” is his first project entirely of his own compositions. Bored with just being a DJ, the young man relaunched his career, picking up an MPC and a computer and creating his own beats to dive head first into songwriting.

“Calm Down” came together with the help of a friend and frequent collaborator Estimate, who did all of the recording and mixing. This 9 track album was mastered by Seattle native Sendai Mike. The high quality recording features unusual melodies and lots of live instrumentation, combined to showcase IMA’s broad musical ear which has been influenced by the likes of Kendrick Lamar, the whole team at Top Dawg Entertainment, artists at Dreamville Records, EarthGang, SiR and Kanye West.

IMA has little interest in creating music which sounds like everything else, and he constantly strives to find the lane of being lyrically and musically sophisticated while remaining listenable for a pop audience. “I want my music to be more than just simple patterns for a basic listener,” IMA said. “I want it to be more complex.”

Earlier in his music career, Isaiah collaborated on numerous single and album releases under different aliases over the years. He was producing beats for other rappers, giving them choruses and rapping on their singles. Forging ahead with a new stage in his career, “Calm Down” is a collection of music influenced by the past year and a half of IMA’s life. Mixing cocktails and shucking oysters (despite an allergy to shellfish!) at a top Seattle restaurant means IMA is privy to the lifestyle of the high end restaurant scene which has provided inspiration for his lyrics.

When he was growing up, IMA lived in Puerto Rico and on several military bases which is also reflected in his unique music and lyrics. The half Native American, half black arts kid went to a high school in the Pacific Northwest which has produced fashion models, art scene aficionados and indie bands. IMA has eclectic views and different perspectives which come through in his music. He said “I feel like I have a worldly view because I’ve been around so many different people, and had to adapt to different circumstances continuously which makes me able to talk to a lot of different people with a lot of different perspectives.”

“Calm Down” dropped on September 12 and is available on all digital platforms. The album’s first track and lead single is called Shinin’ which the artist described as a party track with a house beat. IMA will follow with a music video for Shinin’ shortly after the song’s release.

To listen to IMA’s music, or to follow IMA on social media, please visit: