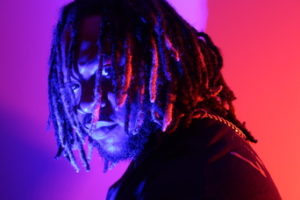 ELIZABETH, NJ – JHN.K is an artist from New Jersey who’s music is an illustration of his past, present and future. His vision is displayed vividly through his top-tier lyrical prowess and versatile songwriting. Every song he creates is a release of intense emotion focused on captivating the listener. His latest single, “Legends Never Fall,” is no exception.

Created with the intention of feeling like you’re pushing for so long for something and then finally gain that success, “Legends Never Fall” is the kind of inspirational track that audiences all over the world will be using to motivate themselves for years to come. Inspired by the legendary DMX – one of JHN.K’s favorite artists – the song uses some dark undertones as a foundation as he brings an aggressive flow that showcases his ability to sing and rap. Overall the vibe of the song feels epic – with ethereal synths in the background that make it feel big and cinematic.

“It’s a song about admitting to myself that I’ll never allow myself to quit,” JHN.K said. “I won’t ever stop. I’m acknowledging that the gifts I have put me in a certain place, and now I’m trying to prove myself to the world. It has an upbeat tone but there are definitely some darker undertones to it, and that’s because of the inspiration of DMX – who passed a few months after we did the record. A few of the lines in there are quotes from his second album. Overall the song has an inspirational message behind it.”

JHN.K is an artist who has been developed his signature sound since he was a kid. He started writing poetry when he was about 11 years old, and the first artist who ever caught his attention was Mos Def. His knowledge of hip-hop grew as he studied other legends from the early 2000s, and one day he started putting his poems to beats. He said many people who listen to his music today can recognize the inspirations he’s used over the years to develop his craft, but ultimately his sound is like nothing else that has ever come before. The combination of vibes that he brings through his music makes him stand out – from his voice to his writing to his high-quality production.

For “Legends Never Fall” JHN.K said he worked with IdiomSounds as the main producer, while his long-time co-producer LES also helped on the track. He’s worked with them on other projects in the past and said they bring another level of quality to the table that music lovers will definitely appreciate. He’s also working on more music with them, and has a bunch of singles ready to drop later this year as things progress. His high-quality videos also showcase an amazing talent and take his brand to a whole other level.

To listen to JHN.K’s music, or to follow him on social media, please visit the following links: