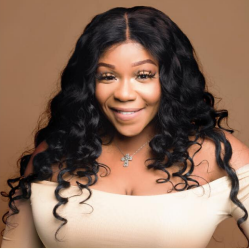 Ask about the latest explosive talent in gospel music today, and you will find that Kristina Halloway is your answer. With a bleeding-edge fusion of the inspirational and infectious sounds of gospel and pop music, and her ability to uplift the masses with enough energy to power several cities, she is well on her way to leaving her indelible mark with the world!

Kristina discovered her ministry at a young age through the musical, emotive expression of God’s word. By partnering with music producer JKeyz, Kristina has been able to evolve traditional gospel, maintain her music ministry, and incorporate a definitive message that even resounds on the dance floor. Beyond what you may hear from Kristina on Spotify or iTunes, her stage performance is doubly outstanding. Many agree that her music is unlike anything they’ve ever heard; for it inspires many from the church to the world!

Coupled with a distinctive sound and style, Kristina Halloway is a fascinating artist who hopes to bring her youthful, fashionable, and magnetic personality to young audiences abroad. Her artistic mission is to continually demonstrate that God is as cool as He is omnipotent. In addition to being a gifted vocalist and actress, the New York native, also recognized as CEO of Faith On A Thousand LLC, has also partnered with charitable organizations to support noble causes such as the Watchful Eye’s “Effective AIDS Awareness Campaign.”

Today she is a well-decorated songstress, receiving such honors as the Stellar and ASCAP Awards for New Artist of the Year (2011) and a BET Music Award nomination for the same category (2011). She has also been recognized by Homeland Security for the stellar example she sets for the youth of today.

With captivating songs like “Faith On A Thousand” and “Just A Sunrise Away,” Kristina Halloway has set her sights on fulfilling her dreams, one accomplishment at a time. She is living proof of her compositions and continues to inspire others through them. Every day for Kristina is a mission to get her uniquely mainstream sound and heartfelt message to fans who patiently await the next big thing in music.