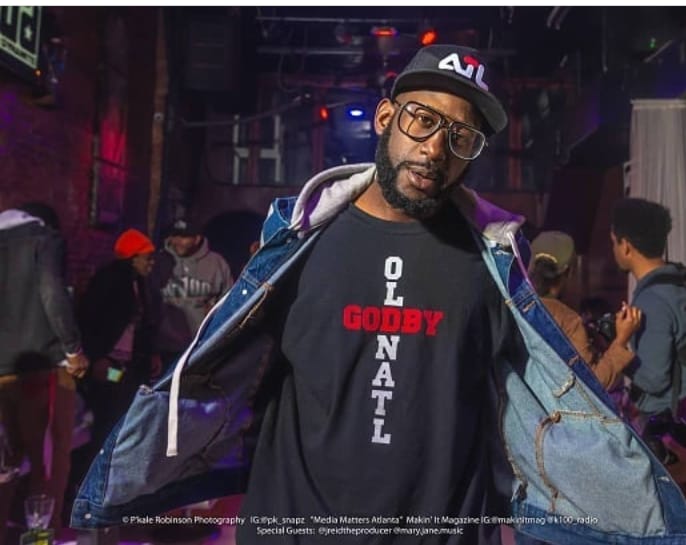 Thanks for sharing your story with us John. So, let’s start at the beginning and we can move on from there.
A guy by the name of Victor Walker had a radio show on WRFG 89.3 FM called Ridin Durty Radio that came on Thursday night from 3 am to 6 am. I was working at the airport and had Wednesdays and Thursdays off. So, one day, I went up there to support him. I saw he was playing music from Underground/Independent artists that I heard in the clubs that the other radio stations weren’t playing. After the show, I told him how can I be a part of the show whether it was promoting the show, finding music, booking guests, anything I could do to bring value to the show. A year later, I met a woman named Christiana Davis aka ‘Bosslady’ and we became really good friends. She was given an opportunity to start an internet radio station called Atlanta Hott Radio. At that time, the internet radio was just popping off. So, I was doing Atlanta Hott Radio and sitting in at Ridin Durty. Whatever I was learning from Vic I was applying to our show. Later, I would get my own show called The Prezidente Suite Radio Show which I started from my dining room. I would buy mixtapes, albums that came out on Tuesdays, music from the record pools and any independent artists that sounded good. From the Internet Radio station, Bosslady and I started a showcase BattleHottlanta where we would give away a thousand dollars. After 12 showcases we stopped, but I continued to do Ridin Durty with Vic until he retired. WRFG had a broadcasting class to be a program engineer. It was close to Father’s Day, so my kids surprised me by paying for the class. Took the class and graduated. I met a guy by the name of Horace Hawkins aka DJ Powerlord through Vic and the broadcasting class. DJ Powerlord had a show idea and that is how the After Set show came about. I also started a production company Prezidente Suite Productions which I produce along with DJ T-Did-That a show called Down In The Dirty Mixshow where we are preserving the roots of Southern Hip Hop while playing independent artists.

We’re always bombarded by how great it is to pursue your passion, etc. – but we’ve spoken with enough people to know that it’s not always easy. Overall, would you say things have been easy for you?
My wife passed away in 2011. I fell into a deep depression. I was a single dad with three kids working and doing radio. I felt like quitting, but I couldn’t let my kids down. With help from my in-laws, I was able to work and do the radio for the last ten years.

So let’s switch gears a bit and go into The After Set on WRFG 89.3 FM story. Tell us more about it.
The show is called The After Set Hosted By DJ Powerlord, Big Al, and me J.Prez. We are only showing on Atlanta FM radio that plays Bass Music, Funk, Soul, R&B and Gives Independent Artists a shot at airplay through our monthly Pump It or Dump It segment. All you have to do is have your song CLEAN song (RADIO EDIT)

Has luck played a meaningful role in your life and business?
Ain’t no luck. Just believe you can do it and put a plan together and following it through.