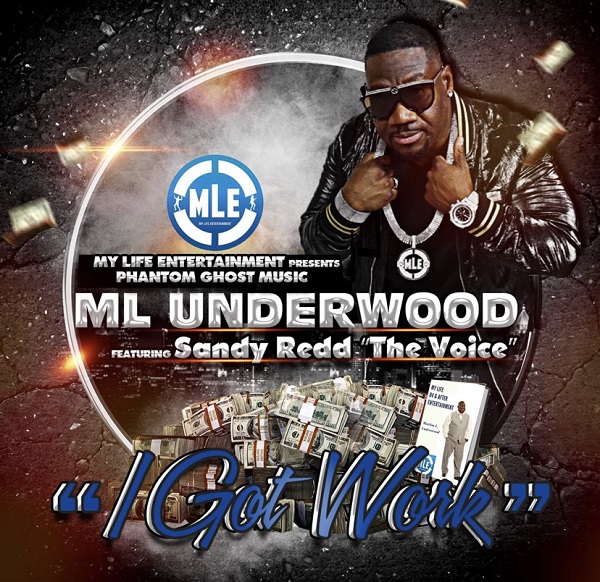 GARY, INDIANA – A man of many talents and lofty goals, ML Underwood is the definition of hard working. His latest single, “I Got Work” is a great example of that. A track that’s focused on working hard and achieving your dreams, this song is the anthem of the year.

Underwood grew up surrounded by music, whether it was at church, at home or out in the world. Having grown up in the same Indiana town as the family of Michael Jackson, his life was always full of music. “My dad was one of the people that helped the Jacksons raise money to get out on the road and support their career. I got started in music through things like that. I also grew up in a religious household, was in a band in school and got to experience a variety of different kinds of music. I played the trumpet and I even sang at school events.”

Growing up, Underwood was influenced by middle school and high school directors as well as the Rap groups that he participated in, Le Boyz and The Lover Boys. They helped him get to where he is as a recording artist as well as helped to shape his style as a musician. Mrs Hatcher and Mr Phillips, his music teachers in Elementary and High School also helped influenced him in music “Right now, I would define my sound as subtle. It is clean, subtle, sexy and just overall grown.”

“I Got Work,” the latest track that Underwood has released, has his signature subtle feel to it, but also presents a bigger and much less subtle idea. “The idea of the song is to give people in urban communities a better way to make money than doing it in the streets. I put into the song that your business is your work and that means that your goals and whatever it is that you’re trying to be is your real work. It’s honest work. The title of the song might make you think that it is about making money off of drugs or on the streets, but it’s really the exact opposite. It is about building generational wealth and creating a future for yourself.”

Though “I Got Work” is Underwood’s latest track, it is far from his last. “I am always getting better and better. My goal is that every song I put out is better than the last. No matter how far I’ve gone, I’ve always got work to do.”

Underwood is more than just a musician. He has goals of expanding his artistic ventures and already does a variety of work in different industries. This includes founding and running his consulting agency, MyLife Entertainment and establishing the United Prisoner Association, which helps inmates who are wrongfully imprisoned as well as helping young people to turn their lives around.

“My goal is to go platinum and create a platform for more opportunities for myself and for others. I want to pave the way for other artists in my area so that they can have a fair shot and the chance to make it on their own. Right now, I have relationships and resources that have allowed me to get to where I am, and I hope that when I’m done, I can help young artists down the same path of success.”

Learn more about ML Underwood, his music and all of his other ventures via the links provided below.