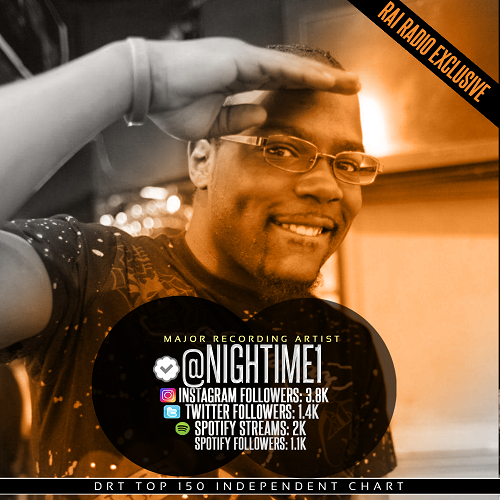 What’s good Nightime talk to us about how music became your passion?

I Started doing music in highschool i was infatuated with the battle rap scene & the thrill of just being in a cypher.

Harlem, New York birth place of some of the dopest MC’s in the business. How do you stand out from other artist shaking in your city?

What tends to make me stand out is my high energy live shows most fans like my word play but they always rember my performance.

Describe your sound what would fans say about how Nightime’s music sounds?

What music or projects are you currently working now?

Right Now im Working on My Sophmore album Tomorrow Never Dies . My lead single #SaveTheWorld has Charted in the Top 150 Independent artists . Im Also Featured on MI-6 Music Innovators latest Single Fit The Desription you can Look for me on their #EvictionNotice Projects aswell. As Their upcoming Project The World is Not Enough.

Tell us the origin behind MI-6?

The MI-6 Music Innovators Was created by Myself & DJ Uncle Tone to form a Group of highly talented artists ,Dj, Producers to Create a Super group .

Not only are you an artist but you also put together showcases for other artist? Why did you decide to dive into this part of the business?

In The Beginning i started doing Showcases for purely selfish reasons .I was in a Bad Record Deal with a Major Label at the time & my project was Shelfed stipulations of my deal restricted performances in other peoples events without label approval the loophole was i could perform in own events. After the first Few events i began meeting artists in similar situations or just interested in performing so id let them perform for free . After the First year I met DJ Uncle Tone who was doing the same thing Around 2005 We began working together to collaborate on Showcases . Which later expanded to Tours & A Record labels .

What are some of the biggest mistakes you’ve seen other artists make so far?

Not learning about Royalties Not registering with a Pro & not Copywriting their music . Most artists dont understand The paperwork behind the music so they will never fully overstand what they are owed & who is being payed.

What are your plans for the future?

I Plan to release another album & Continue expanding the Labels roster. I Just Signed a Producer from Tel Aviv yesterday ,im excited that we have the opportunity to Provide a platform for all the artists we have helped develop.

What can you be found on social networks?