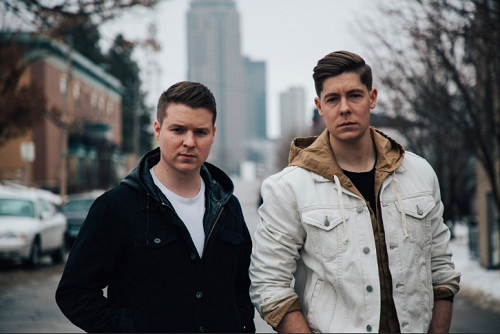 “JMMJ” is a musical duo out of West Des Moines, Iowa: two Midwesterners that write and produce their own unique sound. JMMJ put out their first self-titled, self-released album in 2016. They have always been focused on creating clean music with a positive message, but their new album shifts the focus to emphasize themes of faith and love. They flip the script to promote the message of “loving your neighbor” in a genre of music that is often to the contrary. They combine hip/hop and electronic sounds, creating indelible rhythms.

Spreading joy through music is their goal and their passion. The new album is set to be released in February, titled “Two Part.” JMMJ produce everything themselves, with the help of their sound engineer, Jon Locker, at Sonic Factory Studios in Des Moines. They have created two music videos, directed by Hannah Jerome, who studied film at the University of Kansas. Both videos are available on YouTube. JMMJ are just beginning to take on live performances. Outside of music, they both are pursuing other professional careers. Joel is a
financial analyst working at Sammons in Des Moines. Matthew is finishing his graduate degree in Health Administration and will be joining Michigan Medicine in 2019.

Check out the single, “Solar” on Spotify: https://open.spotify.com/track/20o9jEmuYOkGDKvCLX3fc3