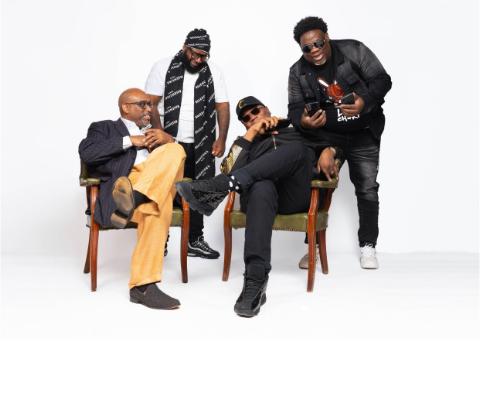 Every creator needs an environment with the necessary resources and tools to be productive and successful. A group of four businessmen and music executives have joined forces to offer just that. Positive Men’s Circle is a safe place for creators and management to have a one-resource portal to handle the needs that may occur to make the creative process a smooth one. “When you’re grinding and you see areas of your platform that can best be served by other like-minded people, a natural alignment organically forms,” says Robert Ross, co-founder of Positive Men’s Circle. Ross says it’s only right to partner with such individuals and watch the magic unfold.  He says Positive Men’s Circle being a creation by four men of color makes it even more unique. Ross is managing partner and chairman of R&R Entertainment in Washington, D.C. The hybrid boutique record label and consulting law firm specializes in IP curation and enforcement within clients’ assets. Ross partnered with Elroy “BAE” Nelson, Tyrone “Ty Ty” Griffin, and Nigel “Be Knows Talent” Lee for the Positive Men’s Circle. The group is as diverse as they come. Nelson is a gifted A&R from Baltimore, Maryland. Ross says every “positive men’s circle” needs a partner like Nelson. He can hear and spot a hit and has a unique way of managing and engaging with his clients. Griffin is the owner of one of the hottest studios in Buckhead, Atlanta, which allows any artist within the Circle’s sphere of influence to have a studio home to create and flourish. “Griffin brings the management, studio, and production components to the circle,” Ross explains. Lee has also made a mark in the music industry with the management of Grammy-nominated and award-winning producers and writers. He previously worked with Universal Music and now partners with industry leaders to deliver a variety of services, including marketing, social media curation, blue check/Google verification, and organic playlisting and charting on all digital signal processors (DSP). With numerous accolades under their belts, Ross says there’s no single accomplishment that outshines another. Every achievement is special. “I’ve been blessed to be part of some incredible experiences in my career and have seen my clients reach their dreams more than I can count. Collectively, we’re going to create another level of greatness,” Ross says. The group does have current projects underway. Ross and Nelson have multiple new artists projects to be released on the MCR imprint in the first quarter of 2022. They also have licensing deals in the works with Nickelodeon, MLB, and an AR/VR 3D mapping company. Griffin continues to cultivate the artists he manages, notably artist Jamie Ray who has 70 million views and counting on TikTok with tour and endorsement deals in progress. In addition to managing his flock of producers and writers, Lee currently co-ventures with his partners in areas of social media integration, SEO management, and DSP/VSP placement. Together, the four-man team is excited about the opportunities Positive Men’s Circle will bring to creators and artists who become part of the initiative.