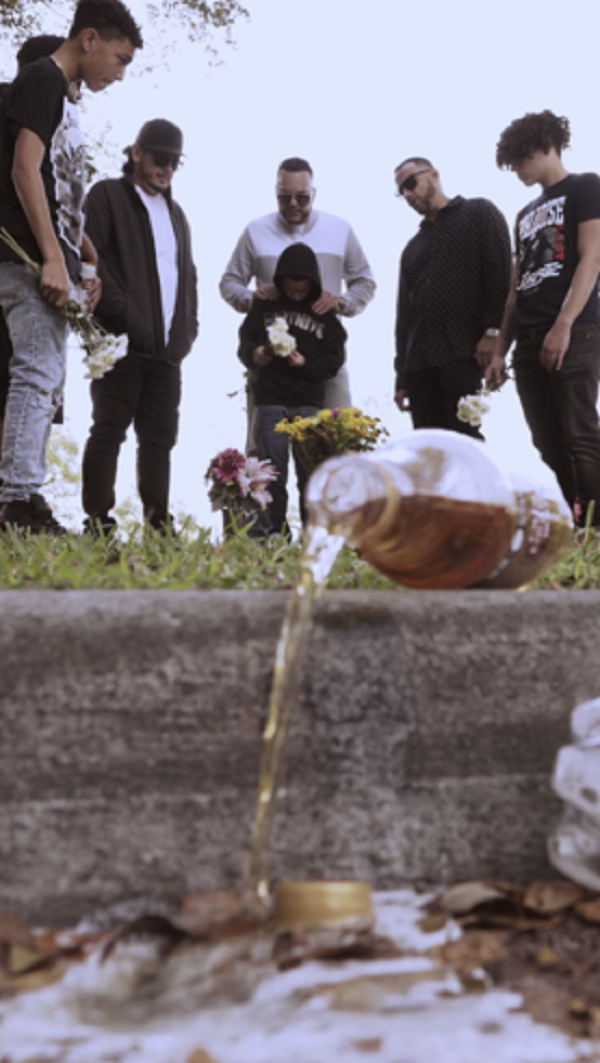 MIAMI, FL – A lot of people have lost loved ones over the past year-and-a-half. Whether through complications with the COVID virus, or through street violence, or police brutality, or any number of other situations – the world has dealt with a lot of loss recently. Cuban-American hip-hop and trap artist Salazar is no different. In 2002 he found his best friend murdered in his own house, and in the years since the feeling of loss and melancholy has been almost overwhelming at times. To help himself and others cope with that pain and mourn in healthy ways, he reached out to fellow artists and longtime friends North Star “Da General” and Agony “The Secret Weapon” to pen the new song “Gone.” Together – with other artists from South Florida – they formed the collective known as Common Ground. With the help of producers Marc French and Dicee of Savoir Faire Entertainment, they created a poignant, almost film-like vibe that is reverberating in powerful ways all around the world.

“It’s tragic,” Salazar said of the loss so many have experienced this year. “A lot of people I mention in the song are friends we lost – people we played baseball with in little league. The common ground the three of us on this track have is we all lost loved ones and friends to police brutality and street violence. We’ve all known each other for 20 years, and it really hits too close to home when we have fallen soldiers. Unfortunately it’s something people can really relate to right now.”

Salazar said other credits on the single include Miguel Profile Castro – who has producer credits in the past with super hip-hop duo Mobb Deep – and Steven Fabian Dorce, AKA “Mic Rippa” – a Miami hip-hop pioneer who was signed to an independent label by the name of Rolly Roll Records and was scooped up to work with the Beatnuts in the early 1990s.

“That’s what makes this song a staple to the Miami hip-hop community,” he said. “These guys were local legends. Miguel would let us in the Miami Dade Community College midi lab, and even if we weren’t matriculated in the school he’d let us be in there working and learning and keeping us out and away from trouble. He’s the reason we met and why we still make music to this day.”

Born in Miami, Florida to Cuban-American parents, Salazar’s childhood dream was to follow in his father’s footsteps and play professional baseball. In 2016 he began to pursue a solo career, focusing on the surging popularity of trap music – a style that he had perfected in the early 2000s before it became a popular sub-genre of hip-hop. His first song after coming back was a single called “Soy Trapero,” which is a made-up slang term for anyone who loves trap music. To say the single put him on the map is an understatement. It’s a song that created its own movement – from clothes and hats to being the No. 1 artist on ReverbNation for Miami. That movement has expanded over the past three years to encompass two unique brands – Soy Trapero and Chico Mobb, with clothes and apparel in Spanish and English, respectively.

Salazar has also worked to create amazing visuals for all his music over the past few years. One of the more recent music videos that has gained a lot of traction is for his hit single “Whippin That Work.” Tens of thousands of viewers have already streamed the video, and the reviews that Salazar has been getting have been impressive. A video for “Gone” is slated to drop on July 13, as well, and Salazar said it will offer visuals that will only serve to elevate the poignancy of the song even more.

“We shot in a cemetery and in a church and by some railroad tracks at sunset – somewhere heavenly with sunlight in the background,” he said. “The images themselves will help you see and feel what we’re trying to bring with this song. We went even to one of the tombstones of one of our homeboys that we’re talking about in the song. They’re amazing visuals that match the song perfectly.”

To listen to Salazar’s music, or to follow him on social media, please visit the following links: