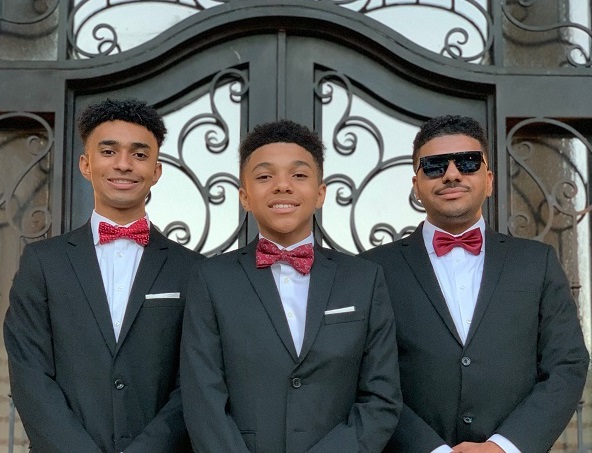 CHARLOTTE, NC – If you haven’t heard of The Gore Boyz yet, it’s time to sit up and pay attention. This Gastonia/Charlotte-based R&B and Pop group is set to become the next big boy band. And their latest single “Spend A Bag” is all the proof you need that they’re about to become a global phenomenon.

Having only been released for a month, “Spend A Bag” already has more than 500,000 streams on Spotify and YouTube, and the buzz around the song just keeps growing and growing. Produced by Grammy Winning artist Theron ‘Neff-u’ Feemaster – who created the theme song for the hit movie “Men In Black” – the single showcases the unique sound and style brought to life by the three Gore brothers – Herman III, 19; Edwin, 17; and Sean Michael, 15. Groomed in the Motown method since 2009, these brothers play instruments, dance and sing a variety of music that appeals to all people. And their raw, natural talent is causing such a stir around the country that they’ve already had opportunities to perform with major names in the industry such as Justin Bieber.

“It all started when our oldest brother, Herman, wanted to be in a talent show in fifth grade,” Sean said. “He wanted to play Mickey Mouse Clubhouse on the piano but he wasn’t good at it. My dad knew an original member of Jodeci who taught me to play the drums, and instead of doing Mickey Mouse Clubhouse, the three of us did ‘Waiting on the World to Change’ by John Mayer. We got first place and we didn’t look back from there.”

Since that time, the band has met and been mentored by Hip Hop and R&B stars such as Usher and even the legendary Jackson Five. Growing up, The Jackson Five and Michael Jackson served as one of the biggest inspirations for the boys, inspiring them to start playing instruments and learning how to dance. They started out dancing with Tommy Hill of Fuzion Force Charlotte, but for the past 7 years and as of today, Chuck Maldonado is currently their Choreographer (Fuzion Force LA). He is also the director for their video ‘SPEND A BAG”. Maldonado has an impressive resume as he has worked with artists such as Chris Brown and as the chief choreographer on the Nickelodeon show “Victorious,” where Ariana Grande got her start. For their day to day affairs, Big Mike of Day 26 is their manager and also does performance/vocal coaching for them.

With “Spend A Bag,” that journey of the past decade comes full circle as it showcases each of their individual talents while also impressing upon the world just how special their music is when they work together. Sean Michael plays the drums and serves as the lead singer, while Edwin plays the guitar and is the main rapper in the band. Herman, the oldest brother, provides harmonies and plays other supporting instruments.

“It’s a song that appeals to all audiences, from young to old,” Herman said. “It’s a song that lets people have a great time which is what we want our music to be about. We create clean and great music – songs that won’t phase out over time.”

In addition to putting in the hard work to pursue a career in music, each of the boys is also an honor roll student and active in the community. Herman has a full-ride scholarship to Morehouse College where he is currently studying biology and is in pre-med. He is also in leadership of the Morehouse Medical Society. Edwin and Sean are both student leaders at their schools, with Sean having been class president every year since fifth grade.

As buzz around their single “Spend A Bag” continues to grow and gather in an ever-widening global audience, The Gore Boyz said they’re excited about what the future will bring and the opportunities they’ll have to continue making music.

“We just want to create music that’s for everybody,” Edwin said. “We make great music you can listen to, dance to, vibe to, and enjoy anywhere you want.”

To listen to The Gore Boyz’s music or to follow them on social media, please visit: