GROTON, CT – If you only listen to the body of work that East Coast artist Dylan Robinson has released over the course of his young career, you might think that he’s an angry, stand-offish fellow. His sound is dark and evocative of heavy bands such as The Suicide Boys or Ghostmane. But if you meet him in person and talk to him for a bit, you’ll realize that he has a very friendly disposition and is actually a pretty nice guy to hang out with. It’s that duality of personality that serves as the impetus for his stage name TooFaced, and it’s that kind of energy that he brings to the table with his new EP “Look Back.”

Currently available across all streaming platforms, “Look Back” shows off an evolution of style and sound from this young artist by introducing a lighter, “sweeter” sound to the dark tones he’s become known for. With five songs, TooFaced blends a lot of different emotions and feelings together as he looks back at his journey so far and revels in a bit of nostalgia.

“It’s about everything anyone works toward and knowing that after a certain amount of time, you can look back and feel like you’ve learned and moved forward,” he said. “I think the main thing that sets me apart from anyone else in the game right now is that I always present an extremely honest view of things. I don’t try to make people think I’m more or less than I am. I don’t fill shoes with what I want to be. And I believe if the whole world could do that, it would be a much better place.”

The debut single from the project is a song called “Numbed Emotions” which is the third track on the EP. TooFaced said it’s the sweetest song he’s ever made and as such, it will surprise a lot of people who are familiar with his work. But that’s what he always hopes to do with his music – offer new things that provide new perspective and a little bit of shock value. Ultimately, the song details his journey in the music world and the various things he’s experienced emotionally. He’s had to sacrifice a lot – from love to friends to extended relationships. But in the end, he said being “on top” makes it all worth it and the sacrifice ultimately necessary.

“My music is, quite simply, honesty,” he said. “It’s music that inspires people to find out their own truths.”

TooFaced said he’s working on more music to follow up “Look Back” and has another EP that should drop before the summer that will feature a lot of lo-fi type music.

To listen to TooFaced’s music or to follow him on social media, please visit: 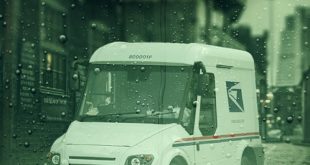 Check out “Mailman”, a brand new release by Ricotana