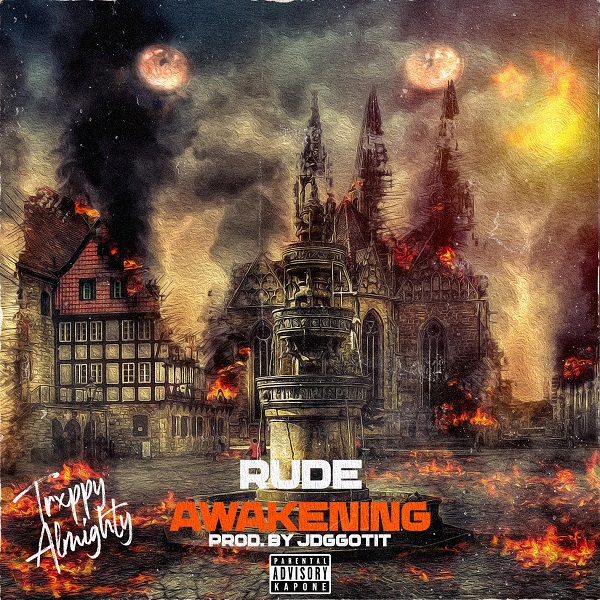 CHICAGO, IL – With an eccentric sound and the goals of taking on the Hip Hop scene, Trxppy Almighty is truly an artist to keep an eye out for. Recently, he has released his third mixtape, “Rude Awakening”, where he shows off his versatility, his sound and his true talent as a musician.

Trxppy Almighty has always had musical influences in his life, with four uncles who made music in a Rap group which he looked up to and aspired to be like. He started getting into music when he was only in middle school, getting together with friends to create music. “I first started making music when I was in middle school. I had two friends that I had this little Rap group going on with, but I was never able to record anything because I never had the chance to visit a studio back then.  I was always in the process of putting my tracks out there though.” In 2018, he was able to get into music more seriously, starting out in basement studios, releasing tracks on Soundcloud and working his way up to working in professional level studios with engineers and releasing on major platforms.

“I make music that has a deep meaning of value. I can be considered a rapper although I don’t want to only put myself in that category. I would say that my sound is very melodic. I use a lot of melodies if I’m not actually rapping on the beat. Basically, I would consider my sound to be unique melodies and really just changing and developing with whatever my mood is on a given day.”

Drawing from a handful of inspirations and artists that he has a great deal of respect for, Trxppy Almighty has a variety of music that he considers to be important to both artistic growth and his personal life. “My favorite of all time would probably be Lil Wayne. I would try to learn his rhythmic patterns and things like that. I was always studying how he would do his choruses and hooks and I always considered him a really amazing artist. Hearing the way he would play with words and melodies… he was kind of a pillar in terms of rappers to me.”

“Rude Awakening” is Trxppy Almighty’s third and most recent mixtape. It is designed to show off his artistic versatility and skills in a variety of different styles and genres. “I feel like I’ve always been kind of slept on and it is time for people to wake up. Whether they want to hear me or not, there’s no stopping me. They will either hear me or see me somewhere in some form or another. This 14-song project shows off the versatility and the growth and experience in my music. I’m just really proud of our producer Jalil Da God and all of the work we’ve done to get it where we are.”

Some of Trxppy Almighty’s favorite tracks on the mixtape include “Problem Child,” “Money Talks,” and “Heaven Sent.” The tracks discuss everything from his upbringing in the East side of Chicago to the hardships that he has gone through and the goals that he has for the future.

Check out Trxppy Almighty on social media and give his mixtape a listen via the links below.