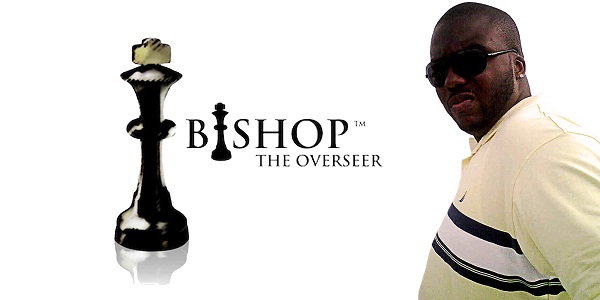 GREETINGS BISHOP, GREAT TO LINK UP WITH YOU AND PROVIDE US WITH THE OPPORTUNITY TO POSE A FEW QUESTIONS.
YOUR TRACK, ‘RUNNIN BACK’, IS QUITE A REMARKABLE ARTISTIC ACHIEVEMENT IN EVERY MUSICAL ASPECT. SO TELL US, WHAT INSPIRED THE TRACK?

Peace to you and yours. I appreciate your interest in the single. I’m humbled by the reviews and this subsequent interview. It is psychologically impactful when you’re exposed to albums like “Black America Again” [Common] and “To Pimp A Butterfly” [Kendrick Lamar]. In these times, there are things going on in the world that are greater than oneʼs self. As an artist, you have a duty to report current events as accurately and honestly as lyrically possible. When you see a dead child from Syria wash up upon the shores of Turkey; when nearly 200 girls remain missing after being kidnapped by Boko Haram; and when African American males are being executed in the streets of United States by the police without due process; you have no other choice but to address the facts. Events such as these and moreover inspired “Runnin Back”.

Actually, I have not performed “Runnin Back” live publicly. The label is still in the music servicing phase of the single. The reception from the DJ’s, Record Pools, and Radio Stations has been very welcoming. The average rating is approximately 3.5/4 out of 5. The next phase of the project will consist of shooting a music video.

“Runnin Back” is food for the soul…

DO YOU THINK THE TRACK WOULD HAVE FARED BETTER IN TERMS OF WIDER ACCEPTANCE?

PERSONALLY I AM CAPTIVATED BY YOUR CHOICE OF LYRICS. YOU ACTUALLY PLAY WITH WORDS. HENCE MY QUESTION: DO YOU HAVE ANY HISTORY WITH CONVENTIONAL POETRY?

I appreciate that you get the crux that I intended. Yes, the origins of my poetry began in elementary school. Before composing song compositions, I wrote poems. I actively began composing songs in 1996 at the age of 15. Now, 10 commercial releases later, the rest is history.

WHAT IS THE STORY BEHIND THE GREAT HIP-HOP MUSIC YOU DO? DID YOU INITIALLY SET OUT TO BECOME A RAPPER?

I have rigorously studied the craft, past and present content. I have written more songs than I have actually published. I have more than 1,000 songs in my repertoire. Just under 100 songs have been commercially published. Being a “Rapper” was never an objective and never will be. For me, music and the arts has always been therapeutic. Listening to my compositions and the music of others has gotten me through some challenging situations. So it’s extremely important that music has substance. Fame was never an objective. Honestly, I would be content if I could “ghost write” for other acts and continue to record my song compositions for synchronization licensing placement into television, films, commercials and video games.

MY CURIOSITY IS GETTING THE BETTER OF ME. WHAT INFORMED YOUR CHOICE OF THE STAGE NAME ‘BISHOP THE OVERSEER’?

Once upon a time, my stage name was “Ses Dogg”. Growing up in Newark, New Jersey, people would call me “Ses” because they couldn’t pronounce my birth name. As a teenager, I was advised by a potential manager that I should change my stage name to something that could sustain long term. In my quest for names, I wanted to choose something meaningful. Something that in 20 years, where I stand today, I could stand behind. Long story short, I chose “Bishop” based on its religious background. I have always been a God fearing believer, and although imperfect, my belief is unwavering. Bishop’s acronym is “Best Individual Style Only Happens through Potential” which is self explanatory. “The Overseer” in the church is a nickname for a Bishop. The Overseer oversees the operations in which the Bishop is responsible for in the church. As the “Overseer” in the Hip-Hop/Rap industry, I have a duty as one of the gatekeepers of the culture to ensure that the content I publish is sustainable music with substance.

THE HIP-HOP MUSIC INDUSTRY IN ANY PART OF THE WORLD IS SADDLED WITH ITS OWN PECULIAR LIMITATIONS. HOWEVER, THE INDUSTRY IN THE U.S SEEMS TO ENJOY THE REGARD AS THE POSTER CHILD FOR ARTISTIC AND COMMERCIAL EXCELLENCE. DO YOU THINK THE INDUSTRY IS AT ITS PEAK IN THE U.S?

From a commercialization prospective, yes. It’s much more lucrative in the marketplace today than it once was. Knowing the market and how to exploit it is key. Streaming, sync placement and brand campaigns (artist representing products and services) is the future, going forward, until further notice. It’s no longer about album/single sales or downloads. It’s about visibility and buzz. Touring and live performances are irreplaceable for those that can develop and sustain a loyal fan base.

AFRICAN HIP-HOP ARTISTS HAVE LONG CONSIDERED COLLABORATIONS WITH THEIR AMERICAN COUNTERPARTS AS A MOVE FOR SUCCESS IN THEIR CAREERS. MOST OFTEN THAN NOT, IT DOESN’T WORK OUT AS ENVISIONED, SOMETIMES WITH SCANDALOUS CONSEQUENCES BACK HOME. COULD THERE BE SOMETHING THE AFRICAN RAP ARTISTS COULD DO BETTER IN THEIR APPROACH?

I am not educated enough on this topic to speak on it. I would need to know the facts and background on what or what wasn’t happening. Generally speaking, if the act is decent and song concept works, I personally don’t have a problem collaborating with anyone regardless of the country of origin.

LET US GET BACK TO YOUR WORK. IS THERE A GENERAL PHILOSOPHY TO YOUR MUSIC?

Yes, it has to have substance. Meaning, it has to have a message. Every topic doesn’t have to be serious or about political or social issues. The topics should be diverse, categorically and well articulated.

WHAT DO YOU HAVE GOING AT THE MOMENT? ANY PROJECTS IN THE WORKS?

Our label re-released “Money Spot (Pt. 1)” on August 29, 2017. It is a remastered double album “Eastside” and “Westside” consisting of 22 tracks with 4 additional “ghost tracks”. The single “Runnin Back” is from the album “44 Steps Forward/45 Steps Back” which is in the creative development process. The focus, as I stated previously, is shooting the music video for “Runnin Back” and continue its global exploitation and notoriety.

“Without the people there’s no me…”

‘RUNNIN BACK’ HAS BEEN ENJOYING PLAY TIME ON UBUNTUFM HIP-HOP RADIO, AND GARNERING SOME CONSIDERABLE INTEREST FROM OUR LISTENING AUDIENCE. PERHAPS YOU HAVE A WORD FOR THEM BEFORE WE WRAP UP.

Bishop Enterprises Publishing and I appreciate you, UbuntuFM, and your listeners for supporting “Runnin Back”. This is for the people and the worldwide movement for social justice, equality and self-awareness. Without the people there’s no me, no Bishop Enterprises or any other label or act seeking to publish art or music. The movement starts with the people and the people supporting content with substance. When given the opportunity, I would love to perform live in Johannesburg. Never let discouragement destroy your reason for being (manifest destiny).

OUR SINCERE GRATITUDE FOR THE OPPORTUNITY TO HAVE YOU ON THE PLATFORM. WE WISH THE BEST FOR YOUR ARTISTIC ENDEAVORS EVEN AS WE EXPECT TO ENTERTAIN OUR AUDIENCE WITH MORE FROM YOU.

Thank you for having me. Peace to you and yours. Likewise. Wishing you the best. Bishop out.