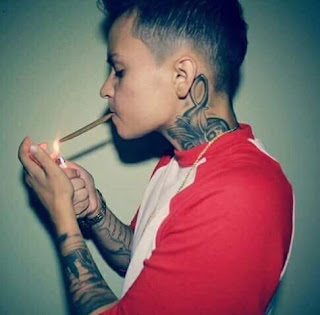 CLEVELAND, OH – No matter how many people say you can’t do something… do what you can
to be comfortable with yourself.

That’s the life motto of new Cleveland, Ohio artist Kelz. And it’s the theme behind her new
single “Bleezy,” which dropped on Dec. 11 on all digital distribution sites. It’s a song that she
said takes a close look into her personal life and opens up about her transition from a “really
girly girl” to being a “big tomboy.”

“The song and video stars with me looking very feminine in the beginning,” Kelz said. “But then
I go into the bathroom and dress as a tomboy. Both in the video and in the song I do it to be
comfortable in my own skin. And that’s what I want to represent with my music to other
people. Be yourself no matter what. Do what feels good to you. Since I’ve started making that
kind of music and releasing it, I’ve been surprised by the amount of people who have hit me up saying I inspire them. That’s crazy to me, but it’s a good feeling. The idea of being myself
making others want to be themselves is crazy.”

Though Kelz is enjoying some strong success now – including recently signing with
WattsyMusicEnt for representation – her journey hasn’t always been this enjoyable. Kelz comes
from a rough background on the streets of Cleveland. It’s a rough background that eventually
landed her in prison for three years. But once she got out she pursued a path that would turn
her dark past into a bright future. She said she picked up music as a hobby after discovering
early on in life that she had a knack for poetry and wordplay. When she got out of prison, she
needed something positive to focus on in order to stay out of trouble. Her hobby with music
soon became her passion, and ever since then she’s been slowly building a fanbase of others
who also love her music and her perspective.

In just two years of making music, she has already gained the attention of millions of listeners.
Her single “Bodak Yellow Remix” went viral with 2 million views on Facebook in 2017. With zero
family support, she managed to take over the entire Ohio Valley in the matter of a year –
winning a total of four OVHH Awards, including: Artist of the Year, Video of the Year, Best
EP/Album and Best Duo. She has also had the opportunity to open up for Corey Gunz, DJ Unk,
Waka Flaka, Montana Of 300, Lil Reese and at the Yemipalooza Music Festival. And on top of all
that, she has also modeled for independent clothing companies such as Killigraphy and
Redemption.

“People really love her and gravitate toward her because they can really relate,” said Slick
Watts, former Underground Music Award Winner. “Her fans are die-hard fans and we plan to
take it to the next level in 2018 and she’s about to take it to the next level. She has a strong
following, and now it’s about getting her as much exposure as possible. Once the masses get a
chance to hear Kelz and see the work that she puts in, the sky will be the limit.”

To listen to Kelz’s music, or to follow her on social media, please visit:
https://www.facebook.com/kelzkelzkelzkelz
https://www.instagram.com/thisis_kelz/