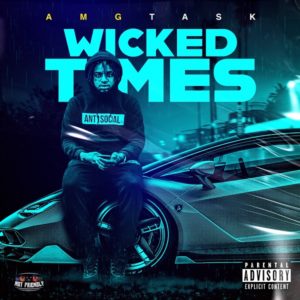 ATLANTA, GA – AMGTask has been to some pretty exotic places in his life, and many of those places carry memories of crazy experiences – all of which take center stage with his new EP “Wicked Times.” Due to drop across all streaming platforms in mid-September, this new project from one of Atlanta’s hottest up-and-coming artists is the perfect kind of international vibe to reach a huge global audience.

Each song on the album relates to Task in one way or another, while also painting pictures for listeners to help them feel as if they’re in the midst of his experiences. From Puerto Rico to Las Vegas and Miami, the “Wicked Times” that he describes are a fun-filled ride of adventure across the world.

“It’s basically about the crazy things I’ve been through to get to where I’m at today, while also featuring a lot of exotic places,” Task said. “That will come through even more with the videos we’re doing. In one of the songs, we’re shooting in Puerto Rico and giving it more of an ancient look. I was just in Las Vegas shooting for another video and in Miami for yet another one. I want to give people an experience that they haven’t had before, and when you pair that with the sound I’ve created – with some Rap and melody type of flow – you’ll get a completely different style from anything else out there.”

The debut single, “Not Friendly” is a perfect example of how Task’s original style takes center stage. It pays homage to the Alliance Music Group that he calls family, and especially to Baby D who he said was like a big brother to him. The song introduces the AMG brand and explores the various ways in which the team has evolved and grown closer over the years.

“When I was young, they brought me in under their wings and guided me off the streets into the entertainment industry,” Task said. “They helped me step up my music to another level and get in clubs and do concerts and stuff like that. Since then, we’ve opened up a clothing line called Not Friendly clothing which features five different faces with five different emotions. People can be not friendly in their own way, even the nicest person, and that’s kind of the idea behind the clothing line. It branched out from there to Not Friendly Records. I also have a hair salon I opened up called Not Friendly Salon, and now we’ve moved all the businesses under that Not Friendly umbrella. A lot of people know about Not Friendly in Atlanta, and this song is really about everything that comes with that brand.”

At the end of the day, Task said he hopes he becomes known as an artist who always puts out good music about his life. He said he hopes his music is relatable to a wide range of people all over the world, and by relating to what he has gone through it will inspire them to find ways through their own situations.

“If people see me as a role model who did positive things with his life even when he had to go through similar things to what they’ve gone through, that would be awesome,” Task said. “I want them to hear the feeling behind it and feel it, and if you can relate to me then maybe you can understand how my things can help you.”

To listen to AMGTask’s music or to follow him on social media, please visit: