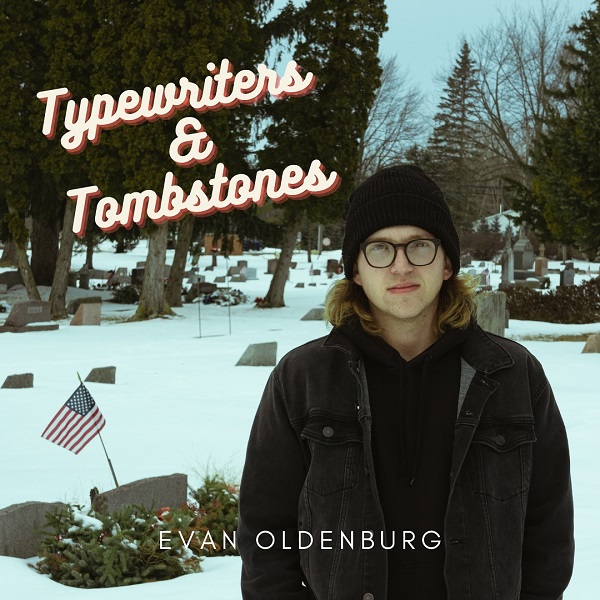 SAGINAW, MI – Anyone who has ever heard an old-school typewriter knows that there’s a certain nostalgic rhythm that comes with the machine. It’s hypnotic, in a way, and evokes a specific kind of feeling. That unique vibe is what Michigan artist Evan Oldenburg has captured with his latest album, “Typewriters & Tombstones” which is currently available across all streaming platforms. After years of recording and performing with the band Rounding Third, he has ventured out on his own to pursue a career as an independent artist, and this is his debut solo release.

“I like typewriters because there’s a rhythm to them that inspires music to a certain degree,” he said. “The intro and outro of this album have typewriter sounds but overall, it’s an album that is a pretty good split between Punk Rock and Folk. It’s a project that examines death and finality and what we do with our lives.”

Oldenburg is from a small farm town in Mid-Michigan, where he was raised on a steady diet of Bruce Springsteen and Doo-Wap music. In 2007, he had the opportunity to see Springsteen live on his Magic Tour, and the music bug took hold. He picked up the guitar after reading Slash’s autobiography and hasn’t looked back since. He said music has become like therapy for him, and as he’s matured over the years, he’s found fewer and fewer songs that he connects with.

“So I decided to write my own songs,” he said. “I write what I know and what happens to me, and it’s usually catchy Punk Rock that deals with real things. It’s not made up. I take a bit of an old-school approach to songwriting – just basic chords and basic poetry. But I’m trying to write songs that will get stuck in people’s heads. I want people to relate to these songs. I had a hard time finding songs that I could relate to, and I think that people listening to these will be able to relate to them in ways that a lot of other music today isn’t able to do.”

The standout single from his album is a great example of that. “Jackie’s Song” is a Folk Rock Ballad with a catchy hook and heavy guitar work that he said is inspired by his girlfriend, Jackie Heath. The song starts from the point of view of a guy who went through a bad breakup and has given up on love. But “Jackie” comes out of nowhere and reignites the passion in his life.

“She inspired a lot of things,” Oldenburg said of his girlfriend Jackie. “I have grandparents who dated in high school and ended up staying together for 65 years until he died, and Jackie makes me believe I could be with someone like that for the rest of my life. She makes me dream about life in the future.”

Not only is Heath the inspiration for that single, but she also is featured as a vocalist on another song from the album, “Blue Eyed Beauty.” Oldenburg also worked with his cousin, Nathan Thompson, and a friend, Jared Murphy, who played guitar and bass respectively on a couple of songs on the album.

To listen to Evan Oldenburg’s music or to follow him on social media, please visit: