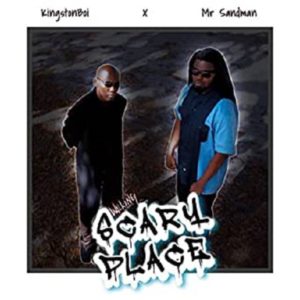 There’s nothing scary about the song. In fact, it offers up hopeful reassurance, thanks to gospel-driven vocals, soft percussion, and a mellow dub beat. Mr. Sandman sings, offering a vocal and narrative counterpart to Kingston Boi’s rapping. “The first verse is through my own perspective and experiences. The second verse is motivational, letting other people know that I was able to overcome my obstacles in scary places, and they can too,” the rapper says. Sandman brings his own story to his verses. “The song means a lot to him also. He had a situation in his life he had to deal with. He’s dealing with it now. To keep it positive and stay on the right track he chose to deal with it rather than avoid it,” KingstonBoi says, explaining another way in incorporate the lessons of someone who’s struggled with scary places himself.

KingstonBoi has been rapping since he was 11 with his close friend James Gregg (aka Dragnizzle, now a frequent collaborator).  Raised by their grandparents, the brothers were always surrounded my musicians, whether at church or in their family lives. “All my aunts and uncles are musicians. They came up in the church. Growing up, I looked to them, and it was something I wanted to do, but I didn’t think I had the voice to be a singer like they were,” he remembers. His grandmother told him he could do anything he put his mind to, an assurance he’s held close all these years.

Remembering her words is especially important since she and his grandfather passed. Of course the artist wishes they could hear how he’s using his voice now, how he’s deftly blending musical styles to send meaningful messages. “I lost my grandmother, Mary L. Blandin, in 2000. I lost my grandfather Nathaniel Blandin, in 2017. These are the people that raised me my whole life. Unfortunately, she wasn’t here to hear me record these songs and put them out there. But I believe she’s looking down on me and she sees it. I believe she and my grandfather will both be able to look at my music and say they’re proud. That, more than anything, means the world to me,” he says.

It’s hard to imagine any grandmother not being proud of him, a young man finding a place for a new voice. In the rap world of hyped-up violence and materialism, KingstonBoi hopes to show listeners new possibilities. “You can come from a bad environment, but that doesn’t mean you gotta be a thug or curse with every other word you say. Music can be more than that,” he says simply. For him, music is a way for us to abandon our illusions of difference—including race—and find what we all have in common.

KingstonBoi will be releasing more singles, and he expects a mixtape to drop in late 2021.