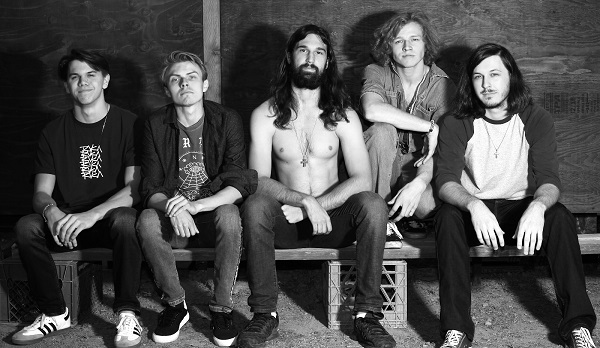 PHOENIX, AZ – A new Rock Band from the Arizona desert is bringing a new vibe to the genre with their blend of Classic Rock, Blues, Alternative Rock and Latin influences. Palomas is an American Alt-Rock Band made up of five friends who have been creating music together for years. Their music is known for its high-energy, catchy, genre-mashing grooves – a sound that is put on full display with their latest single “Brown.”

Written by lead vocalist Joe Gonzalez, the song has a deep Blues root to it with a vibe that makes you want to nod your head and have a good time. Gonzalez’s vocals are reminiscent of Kevin Griffin’s of Better Than Ezra fame, and the band’s groove is immediately evocative of some of the best bands of the 90s and early 2000s, albeit with a modern-day twist.

“It’s a fun song,” Gonzalez said of the new single. “Think of a song you’d hear outdoors at a pool party. That’s the kind of vibe you get with ‘Brown.’ It’s about a girl who’s not worth her money and she’s realizing that her man is coming to see through her and she knows she won’t be there much longer. The main line of the chorus is ‘Is he going to be there when the gold turns brown?’ In other words, when the shit comes out will he still be willing to put up with it?”
Joining Gonzalez in the band are co-lead vocalist and guitarist Sam Otterson, drummer Victor Sese, bass guitar and background vocalist Dane Hess, and lead guitarist Joshua Browning. Though the five of them have known each other since elementary school and have played with each other off-and-on over the years, they’ve only been together as Palomas for the past year-and-a-half. It started when Otterson ran into Gonzalez and Sese who had been playing together in a separate band. Otterson brought in Hess and Sese invited Browning to the game, and all of them agree that almost immediately the stars aligned and things just clicked.

Pretty soon they were making waves in the South with their new brand of Rock & Roll. They won recording time as a finalist prize in the 2019 Alice Cooper’s Proof is in the Pudding Competition, and went on to records “Cards” which has been getting rave reviews. They’ve performed at prominent venues such as Last Exit Live, Rebel Lounge, and CB Live. And because of all that success they’ve had the opportunity to work with professional producer Mikal Blue of One Republic and Porno for Pyros fame. They’ve also worked closely with producer Michael Beck who helped craft the sound for “Cards” and “Brown.”

“A big mission for us is that we want to have an influence over the popular genre of the day,” Gonzalez said. “Our message is that of fun and love and just doing what you need to do to be yourself and not letting other people prevent you from doing that. If our music helps people become their fullest self, we’ll be happy. And ultimately, we want to make Desert Rock a thing.”

To listen to Palomas’ music or to follow them on social media, please visit: