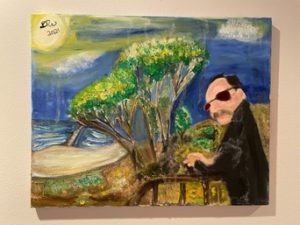 FLAGLER BEACH – The term “one-hit wonder” usually refers to an artist that has a hit and never releases another single to reach the previous song’s popularity. That is not the case for Shocks Band and their latest album, “One Hit Wonder.”

The ten-track LP is packed full of fan-favorite original songs written and performed by Eric Whitman.

“There really wasn’t anything new out in 2020 and 2021,” explained Eric Whitman. “So, I figured this was a good time for me to do an album because, with the pandemic, I was stuck home. So, I wrote all the songs.”

“One Hit Wonder” is 100% studio work compared to the Shock Band’s 2011 album, “A Dedication to Alan Zill,” containing live tracks.

Mixing pop music with some New Orleans style jazz, Whitman’s latest album hits all the right notes and gains popularity on streaming platforms and CD sales. While many fans enjoy the ease of streaming music, the “One Hit Wonder” CD is unique with its hand-drawn cover art by Whitman’s daughter Danielle Whitman. Additionally, liner notes credit the musicians who play on the album’s tracks, which fans do not get to see when streaming music.

“I had music producers Nicole and Courtney with me in the studio, and I played with several other young musicians on the saxophone and lead guitar,” explained the Miami native who plays rhythm and bass guitar on the album.

With its signature guitar riffs and some sweet melodies, the single “I Don’t Know (Voice)” is getting the attention of pop and rock lovers. The album contains two versions because when it’s good, why choose just one version – right?

“Everybody seems to like it. It’s a really good song,” said Whitman. “I wrote the song because every time I turned the news on, there were all these unknowns. We don’t know about this; we don’t know about that. The song just came to me, and I knew I had to record it.”

When asked if he got any of his questions answered, Whitman replied with a chuckle, “You’ll have to listen to the song; maybe it’ll explain it.”

While “I Don’t Know (Voice)” is picking up traction on streaming platforms, Whitman said it is not the only “One Hit Wonder” song getting noticed. The album’s diversity appeals to music fans who enjoy rock, pop, and jazz.

“It all depends on how I wake up in the morning. It’s like whatever comes. It’s just mine. I play it,” explained Whitman about his writing style. “I just go with the flow.”

“One Hit Wonder” also contains “New Orleans,” a jazzy tune with a haunting tenor sax, while “Starlite” showcases a mandolin that “kicks butt.” But Whitman does not put his writing into a box to please fans.

“When people see the ‘One Hit Wonder’ cover, they want to play it. I want them to have fun and enjoy the music.”

Make sure to stay connected to Shocks Band on all platforms for new music, videos, and social posts.