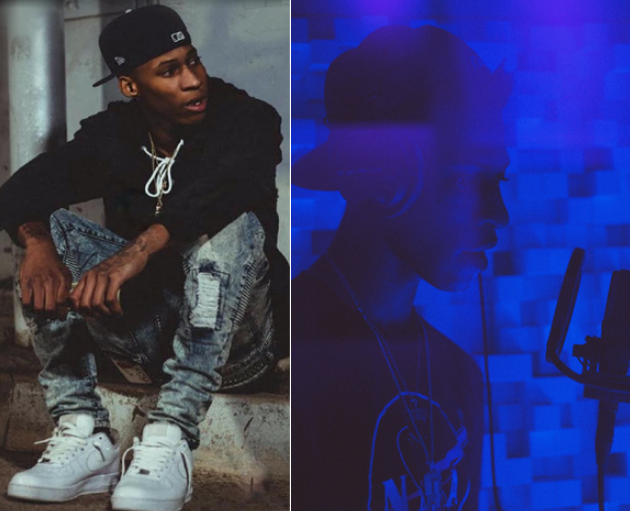 LOS ANGELES, CA – Traakoo (pronounced “TRAY-Ko”), born Tyshawn Tray-vion Edwards, is not your typical artist. Born and raised in several different parts of Los Angeles County throughout his younger years, the 20-year-old emcee has developed a level of talent that far surpasses his age. His West Coast roots developed a deep appreciation for the LA culture, and growing up he bumped artists such as Snoop Dogg, E-40, and The Game. But his knowledge of the hip-hop industry also gave him a deep appreciation of East Coast rappers such as Jay-Z and 50 Cent. It helps that his uncles provided strong figures in his musical life and upbringing, introducing a young Traakoo to these artists’ music as well as sharing their own raps with him. This jump-started Traakoo’s passion, and at just 6 years old he began picking up a mic and reciting lyrics that were written for him. He hasn’t looked back since, leading him to partner with his uncle to form STACK Entertainment Group, where he released his first EP “The Famous Gasser EP.” Releasing music professionally over the past six years has led to Traakoo branching off with his own Label called GASSER Entertainment, as well as his own clothing merch store.

But even with that rich background and business progression, Traakoo feels like he hasn’t gotten the respect he deserves. At such a young age he’s still a veteran of the industry and has the kind of high-quality sound that should stand out from a crowd. And so with his latest single released on his new label, “Bout Time,” he’s sending a message to the world that he’s an artist and boss who demands attention.

“I’ve been rapping since I was 9 and I’ve been good at it for a long time,” Traakoo said. “I’ve been building a brand and a name, but people have been throwing dirt on my name. So this song is basically about my respect. I’ve been doing this for a long time and you need to give me respect.”

More than anything, Traakoo said he labels himself as a Gasser – “The Famous Gasser,” to be more precise. Any song he lays vocals on, he gasses it. One of the sayings he’s become known for, and shows up in all of his songs, is “I’m Finna’ Gas This Bitch, Aye!” He’s an artist who owns this unique niche within the hip-hop genre that is all about gassin’. Essentially, he’s created a sound and style that no one else is doing the way he does it. He’s even gone so far as to make the gas emoji the official symbol of his brand, and you can see that symbol in almost all of his music videos and featured on a lot of the clothes and jewelry he wears on a daily basis.

“I make turnt up music,” he said. “I make aggressive music. I’m gassin’. When you turn me on you’ll know I’m that famous gasser who is gonna get you pumped up and get you lit. If you’re at a party and it’s boring, put my music on and it’s gonna get you jumpin.”

To further showcase this style, Traakoo says he plans to release another single called “Gas A Lot” within the next month to serve as the perfect summer song. With diverse styles, Traakoo has also had success with singles like “Dollar $ign” and “AirBNB.” He’s also working on an EP set to drop later this year called “Something for the Ladies.” Traakoo is definitely someone you want to keep your eyes and ears on.

To listen to Traakoo’s music, check out his merch, or to follow him on social media, please visit the following links: