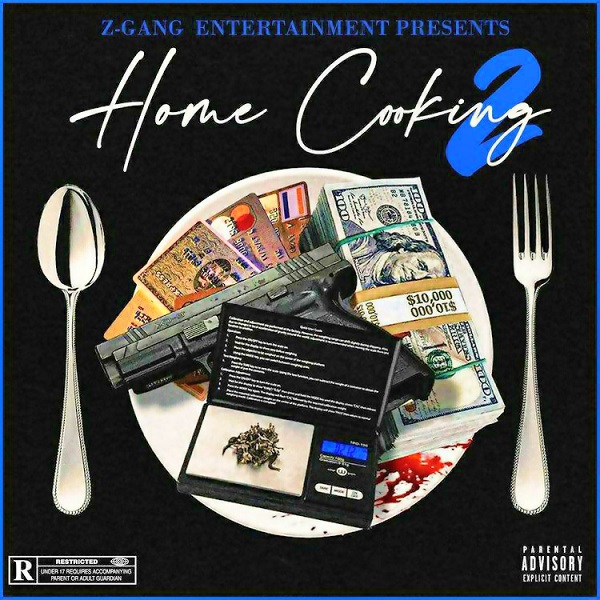 (Chicago)
“It’s real. Take it serious. I’m teaching the youth. This ain’t just boppity bop music. You’ll hear my words clearly,” says Chicago rapper Z-Gang. Drawing on a wealth of backstory from being an acrobat as a child with the Jesse White Tumblers to helping to keep peace in the streets to recovering from a severe car accident, this rapper has no shortage of perspective to offer. He brings those viewpoints—as well as his own stories—to Home Cooking 2, his second EP, due out May 28.

Coming on the heels of Home Cooking 1, dropped at Thanksgiving 2020, the new EP continues to introduce the artist, with the help of impressive guest-stars  Katiegotbandz and Matisse Love. He feels blessed to have surrounded himself with such a strong and supportive team. It is a bit like cooking a meal with people you like and how much better the food tastes.

Like home cooking. Smiling audibly as he explains the title, Z-Gang says “It’s like home cooking. It’s the best of everything. It’s seasoned well. There’s nothing like it.” The artist has been around long enough to see trends come and go and therefore to be confident he offers listeners something new. One song on the EP, “New Shxt,” celebrates that power of innovation and growth.

Yet, the rapper himself nearly wasn’t here to make the song at all. “People don’t know I died in a car accident in 2019. I couldn’t walk. Everything felt like it was over. I couldn’t stay sitting still. I had to get back to me. I was working two jobs. I had to stop working ’cause I couldn’t stand long. I got back up, and I ain’t sitting down,” he promises. In that spirit, he’s already formed his own label where he is the manager, producer, artist, and everything else.

But the artist has a more sensual side too, one on display in “You,” a song he says is for the ladies. “It’s summertime in the islands, you’re with your significant other,” he says, trailing off to imply where the songs leads. “It’s a hip hop song and an R&B song,” Z-Gangs says.

Despite the versatility he displays on the new project, there’s one thing you’ll never hear him do, and that’s glamourize the gang lifestyle.  “I don’t condone that gang-banging stuff. I’m Z-Gang, but that’s Zillionaire Gang because we’re about earning and growth. Not hanging out on the street,” he explains. He’s even acquired the well-earned nickname “the Street Teacher” for his peacekeeping efforts. “I’ve stopped shootouts from happening. I’ve done a lot in my community. I actually teach the street kids to stop doing what they’re doing, even though they ain’t gonna listen. At my studio, two oppositions were there, and I made them work together and shoot a video together. Nobody went to jail and nobody got shot,” he says.

Z-Gang’s second EP, Home Cooking 2, will be out everywhere May 28.