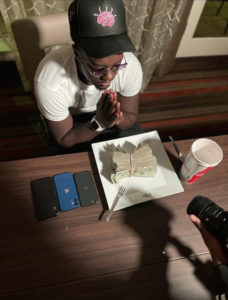 BALTIMORE, MD – Lor Smoke is a rapper who prides himself on his versatility. He can make any type of music, and his catalog of songs shows that. Take his latest single “Magic City / First Day In The A” for example. It’s a song that not only shows what kind of rapper he is, but also his ability to ride any beat and create grooves that people from all walks of life can enjoy.

Inspired by his first visit to Atlanta, the song literally gives listeners a breakdown of his first day in the city. From the time he wakes up to the time he drops back into bed after a long day, he explains everything he did on that first day in Atlanta. The accompanying music video was also shot in Atlanta on the first day he was there, with the idea of capturing everything raw and real and in-the-moment.

“That’s what you get from me as an artist,” Lor Smoke said. “I’m not making up stories or fabricating anything. I’m just giving you my life. I’m writing stuff as I’m doing it. That’s just the type of rapper I am. I’m a reality rapper. Everything you get – from my persona to my lyrics – is just realness.”

Lor Smoke said he’s always been into music, though he didn’t start taking it seriously as a professional recording artist until 2018. He was building up a nice career for himself until in 2019 he was shot because of street violence and he ended up taking a year off. But he came back to music in 2020 and is using his music today to inspire people while also sharing stories from the streets.

“I’m giving you the struggle and telling you what my life is like,” he said. “Every hood in the world is the same – you see the same things and go through the same trials and tribulations. People from those places will be able to relate. But on top of that I have versatility. My catalog will show you I make a lot of different types of music. I can do reality rap, gangsta rap, Trap, Reggaeton … any type of beat you put in front of me, I’m gonna kill it.”

That authenticity and realness is what Lor Smoke said he hopes people will recognize about his music, no matter who they are or where they come from. He wants people to know that what he’s saying is true and real-life. There’s no faking with him, which he said is powerful in today’s entertainment industry that’s often built around fake and fabricated ideas.

Lor Smoke said he plans to follow up “Magic City” with a new single called “300 Addys,” which should drop before the end of the summer.

To listen to Lor Smoke’s music, or to follow him on social media, please visit the following links: You might say Stoop fell into music by accident. After providing vocals for some features …