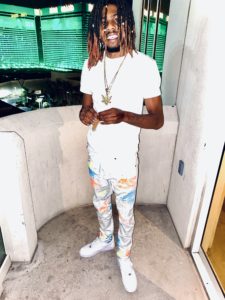 LAS VEGAS, NV – Raw and real take center stage with the latest single from Las Vegas rapper AJ1K. “Hot Sh*t” is aggressive and upbeat while showcasing AJ1K’s ability as a freestyle artist to spit lyrics that are simultaneously entertaining and challenging to the listener. It’s a song that “tells the story of how people are today,” AJ1K said, while focusing on a stream of conscious delivery that opts to leave out a hook in favor of an unending flow of raw emotion in lyrical form.

The single comes on the heels of AJ1K’s successful debut album “Code Red” which he released in 2016. Since that album’s release, he said he’s worked hard at learning more of the industry and business side of music. That said, his debut album was so successful that it caught the attention of Lil Boosie who reached out to him after hearing the album online and invited AJ1K to his house for a listening session.

“I grew up in Mississippi, so the artists I grew up on were Lil Boosie, UGK and 8 Ball,” AJ1K said. “That’s the type of style I grew up on and it really influences my sound. As a child, I was always capable of rapping and I could always freestyle really well off the top of my head. But I never thought I’d get to meet my idol. And when he invited me to his house for a listening session after my ‘Code Red’ release, it really gave me a boost of confidence and made me really buckle down and start to take music seriously.”

That’s when he decided to change his stage name to AJ1K – a play off his birth name, Alfred Jenkins, and the 1,000 percent energy and attention to detail that he brings to everything he does, especially music.

“What I want my music to be known for most is my story,” he said. “‘Code Red’ is more of my storyline than anything else. It’s me being creative, but it’s also being real and authentic. I want to be remembered for that real-ness. I’ve gone through a lot in my life – I lost my mother last year to natural causes, for instance, and I’m only 23. That hit me hard and I put that in my music. So I hope people remember me for being real and being myself at all times. I want my legacy to be remembered for being 1,000.”

As he continues to ride the wave of success from “Hot Sh*t,” AJ1K said he’s hard at work on the follow-up album to “Code Red” which he’s tentatively calling “Code Red 2.” He hopes to release that in early 2021.

To listen to AJ1K’s music or to follow him on social media, please visit: