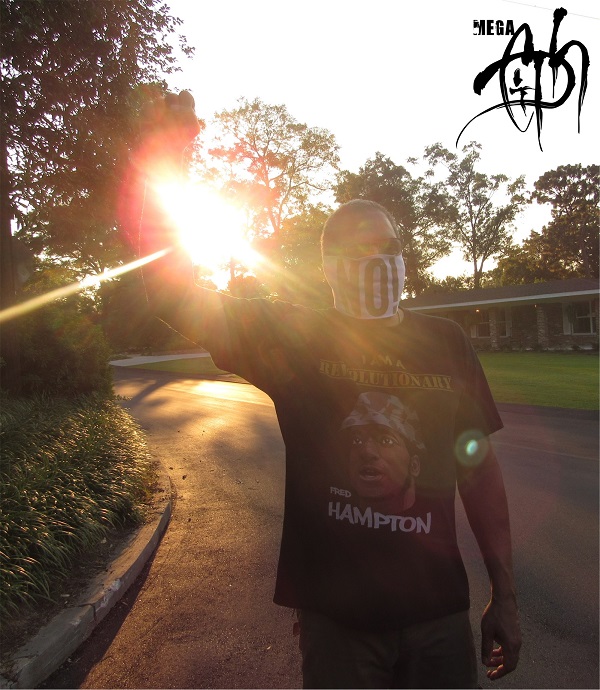 MOBILE, AL – An acronym for Mental Energies Gather and Circulate in Positive Harmony, Megaciph (rhymes with “life”) is making music that appeals to young and old, optimistic and angry. He’s tackling topics that affect the whole world while dropping words of truth, peace and love. This rap music is human rights music that has captured the attention of a diverse group of listeners who crave for more complex concepts than standard rap music industry music has to offer.

“No Fear Now” is the most recent single from Megaciph’s current project, “The Dirty South Chronicles: As Clean As We Wanna Be.” It is a song about the worldwide movement for Black lives in the context of a global pandemic. After he was asked by his son to write a song about staying safe from corona virus, George Floyd was killed and the planet erupted in protest. “The sentiment of “No Fear Now” reflects my feelings about how I want to be treated and perceived as a Black man in America. But these are not just my feelings; there is a universal paradigm shift taking place,” Megaciph said. “The video for this song is my attempt at capturing the essence of these protests, which is power in peace. The George Floyd murder in Minneapolis coming on the heels of months of Covid-19 quarantining highlighted the broad systemic injustices in our global system.” By deliberately including his children’s voices in the chorus, the artist highlights that the struggle continues. “The courage and tenacity of the protests is embodied in the title, “No Fear Now,” he asserted.

Produced by Steve Wallace, “The Dirty South Chronicles: As Clean As We Wanna Be” also includes a feel-good, summer time jam which calls on average citizens and governments alike to get it together. With a similar spirit and call for change as “No Fear Now,” the track, “Everybody Arise” is more upfront about what action is needed.

Later this year, Megaciph will also put out a group of singles called the “MEGADATA” project in collaboration with James Data. If all goes according to plan, many of the new songs will be accompanied by music videos. To date, they have finished three big sounding club bangers with big concepts. The lead single, “Oasis” was released on May 5.

Recorded at Dauphin Street Sound, “Oasis” is a song for a world in transition. It challenges what we think is normal and shows that a new way is possible. “It’s the mood of the people. It’s our fears, our hopes and our dreams wrapped up in one,” Megaciph said. “Oasis” is a song about where we want to go next. The music video, with its low key paranoia and conspiracy theorist vibe, is being edited in Sweden by the same team that worked on Megaciph’s “All Dreams Anyway” video (which can be seen on Megaciph’s website).

Reminiscent of Public Enemy, another “MEGADATA” track, “Critical Condition” talks about underground radio taking back attention and delivering true independent content. The third finished single, titled “Clout” calls out the cell phone culture and the obsession to do just about anything to garner attention.

Megaciph is an artist who has stayed the course during all his years of music making. He has worked with well over a dozen producers and collaborated with several different artists. “I’ve aged so well with my music and with my sense of who I am. It’s never been about getting money. That really comes through in the music,” he said. Passionate and articulate, Megaciph is making movement music for humanity.

These past five years have seen Megaciph’s best shows, biggest concerts, and largest audiences to date. Among other triumphs, he was a featured artist at The Peace and Planet festival in New York City, where he played for over 10,000 activists in Union Square.

Megaciph is from the same generation as Tupac Shakur, Biggie Smalls, Nas, and Master P. While they were breaking into the rap world, Megaciph was being broken down in the US Marine Corps. At 30 years old, Megaciph released his first album in 2006, “The Graduate Program,” as a lyrical manifesto of the proletariat struggle and altruistic emceeing. In 2014, he released “CIVILiAM,” a world class production from seven producers and two guest emcees who are also military veterans. His 2017 EP, “CODESWITCHING,” produced by James Data, landed him a spot on AWAL’s coveted roster of independent artists. Seasoned and consistently excellent, Megaciph will shock and surprise you when you take the time to get to know him.

The artist continues writing and is eager to return to Dauphin Street Sound to finish recording for “MEGADATA” and have the work mixed by an engineer. When the time is right, Megaciph will be set up and ready to get back in the studio and knock out a ton of work.

To listen to Megaciph’s music or follow him on social media, please visit: M-City J.r. is back with the release of his new single, “Pizza Pizza.” Sleep God Proves His Creativity Once Again with “Suicide By Overdose” S7Van is one of those rare talents that breaks into the music business. The Philly …